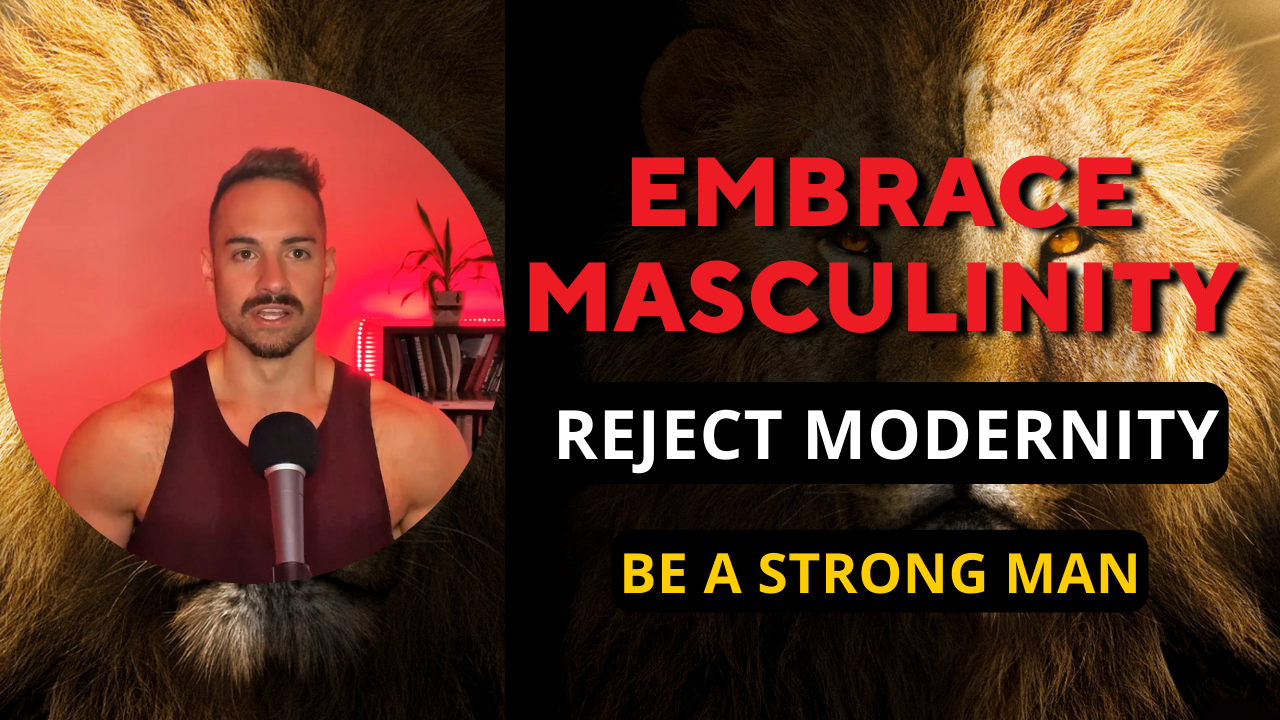 The modern world wants meant to be weak, soft, and feminine.

Society is trying to bring men down and lift women up. What this is doing is this making in this playing field of androgyny where we're mixing men and women, and now I walk down the street and it's tough to tell if this woman's really a woman or if she's a man, what is she?

It's tough to tell anymore. That's what society wants! they have this idea that masculinity is toxic.

That femininity is the way to be, that everybody should be feminine. And this is false. This is one of the most toxic things modern day, and this is why we wanna reject modernity and embrace masculinity.

Cause for each and every one of you men out there, In order to get the life, the woman, the world, the career, the lifestyle that you want, you need to embody your masculinity. You need to step into who you wanna be, who you strive to become as a man, and step into that and embody your most hyper-masculine, healthy, positive masculinity.

It's not easy. It's really difficult when we have society trying to pull men off the course. We're being fed this narrative that masculinity is toxic, that men should be more in their feelings, and that they should be expressive and emotional. Well, men... How is that working out for you? Are you getting the results?

Are you expressing your emotions to your woman? Is that turning her on? Is that making her really attracted to you? Yeah. Tell me how that's working.

Doesn't seem to be working. What's really interesting is what women say they want and what they actually do want are completely different. women will often say they want a nice guy who will wine them and dine them but when that guy comes along they will get rejected. women will say he's too boring.

women will say "I want a man who expresses himself" He's more emotional, and he can cry in front of me.

Well, what happens when you do exactly what she says? she will reject him and move on to a guy who turns her on. Strong men who march to the beat of their own drum turn women on not weak men who will bend to her every demand.

She's looking for a real man. So women will respond differently. Then they think they want, and it's important for men to understand this, and through reading books such as the Way The Superior Man Coach Corey Wayne's book " How to be a 3% man"

These books, these resources, and these leaders, these thought leaders, as a way to tell us and guide us what healthy masculinity looks like.

What does a man have to do in order to build himself up and be the leader of himself so he can lead the men and the women around him?

That's what it comes down to, the women are looking for real men.

Women are always asking, "where the real men are at?"

Well, because they've society, women have told men to be more feminine. Now there aren't as many real men because they want a man that can actually be strong, grounded, and perturbable, Men need to me be an Immovable mountain that doesn't get emotional that can control his emotions or express his emotions appropriately.

Be able to understand what he's feeling and express that appropriately, not just vomit emotions and become completely emotional. If a woman can push you off center and you can become an attraction killer.

You can become perturbed and that then is a sign of weakness, that is a lack of masculine strength.

When you can be moved off-center or when society is trying to tell you, you need to be different.

Don't go outside and play. Don't be aggressive. Don't be competitive. Don't do this. They want you to suppress your masculinity. Well, it's time to reject that and learn. What does it look like to embody masculinity in a healthy way?

What can you do to embrace your masculinity? Educate yourself. You're gonna learn from me here. You can learn from the books I mentioned earlier. There are so many resource resources out there now that are trying to help men because we see that men are being won, they're not being led, or they're being led as straight by society.

it's time that men step up to help other men. Men that have done the work, that has learned how to improve themselves and how to get success with women, with money, with career, with the relationships spiritually, looking at the men that have those successes and then asking those men for either mentorship, support, coaching, or just observing what they do.

Looking at the positive masculine role models out there and looking at what are the ways that they show up in their life? What's their physique? Do they take care of themselves? Are they fit? Do they have an aesthetic body? What's their mindset? What do they think? And so if we can look at what positive masculinity looks like and you embrace that, and you embody it, then everything else is going to fall into place.

You're coming within to your primal human nature and embodying your masculine strength. That's what this is about. So men reject modernity, Embrace your masculinity, and step into it.

And yeah, it's not an easy task, especially when you have so much information out there trying to tell you different things, be in your feelings, be hyper-expressive, blah, blah, blah. Well, Look at the men that are getting the results. Look at the men that have the body, the mind, the emotional control, and the lifestyle that you're looking for.

That's what's going to help men. That's gonna help to heal this world of men that are toxic because they've been led into this feminine narrative. By having community, brotherhood, tribe, and having these conversations with one another, giving support to one another, this is how we can lift each other up so that we can bring positive masculinity back into the world and we can lead men back to being in power in a strong masculine way.

Men and women complement each other.

Men can then show up for their families, for their communities, and for society as a whole. So, Reject modernity, embrace masculinity, and embody the best version of yourself. If you're looking for coaching, you can find a link in the description below the map. The Immense Aesthetic program opens up tomorrow.

If you're interested in that, go to primal rx.com/map. Get the peak physique playbook for [email protected] slash book. Again, I am Cody and I'm here to help men build the aesthetic. The confidence and body, the masculine strength to become the best versions of themselves.

Stay connected with news and updates!

Join our mailing list to receive the latest news and updates from our team.Don't worry, your information will not be shared.

We hate SPAM. We will never sell your information, for any reason. 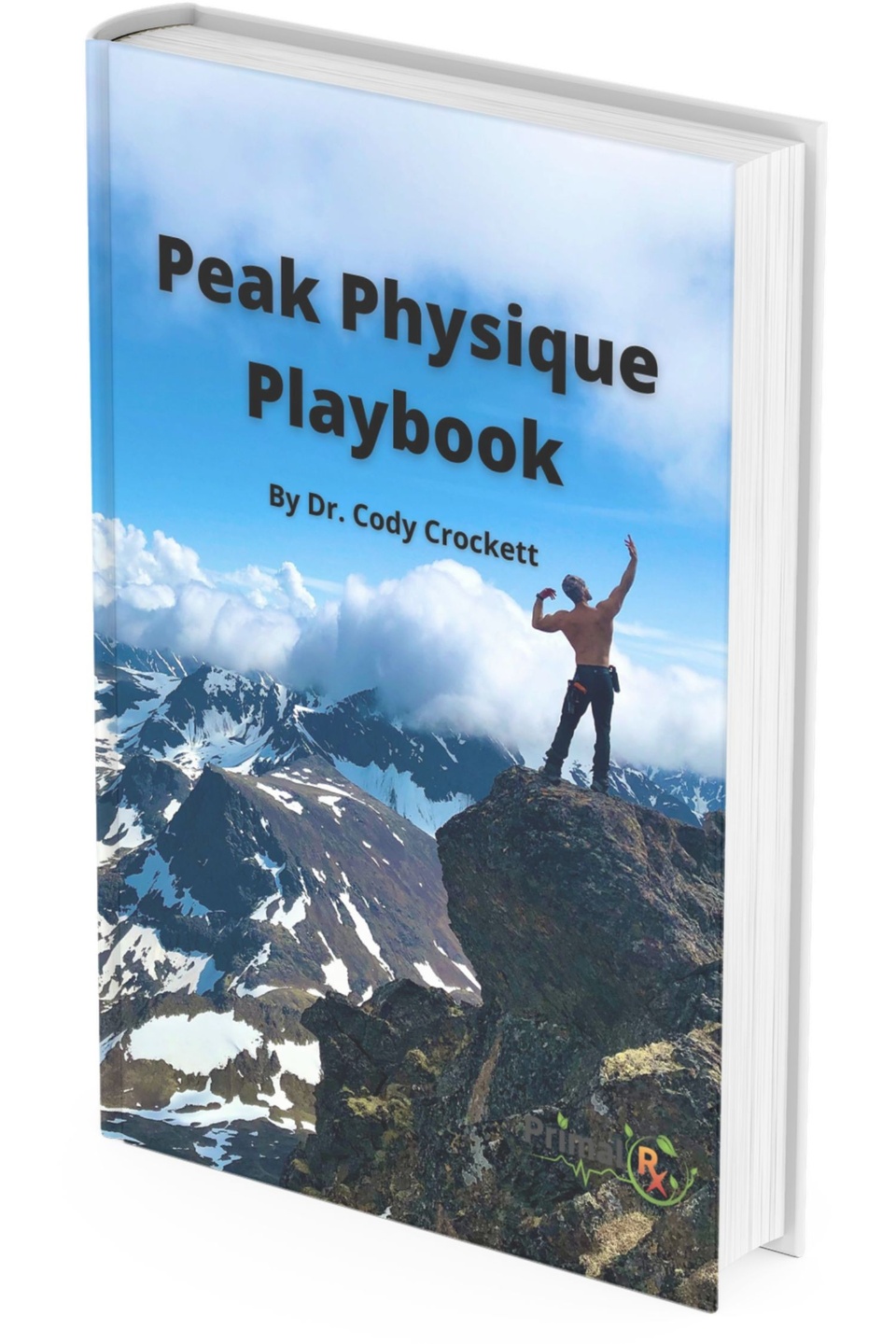 Get The "Peak Physique Playbook" FREE